Skip to Content
Home Lifestyle Life Update 2020, What has been going on?

Chrissi Leave a Comment on Life Update 2020, What has been going on?

Hi and welcome back to my blog.

I hope you all had a lovely Christmas and that January and February were good months for you. Today, I wanted to share a life update with you and explain what has been going on since the start of this year. I never planned to go so long without posting, so thank you so much for bearing with me during this difficult time.

If you read my blog last year, I shared my Goals for 2019; if you missed it you can find the link here. In this blog post, I shared my biggest goal with you all which was to sell my house and move the 3 hours back to be closer to family. It was a very difficult decision to make in the least, mainly owing to the fact we loved our house in Derby and enjoyed the peace and quiet of the rural village we lived in. However, our family began to struggle with their health and every time we loaded up in the car on a Friday night for the long drive, we began to feel resentful of our lives being so far away.

By the end of 2018 we had decided to move and at the beginning of 2019, I started my new job. The move was supposed to be smooth and we had no worries about my other half finding a job initially. I moved into my parents house so I could start my new job in the Spring of 2019 while my other half started job hunting. We had hoped it would be quick. As the months passed and my other half still didn’t get any interviews, the distance between us began to take its toll on our relationship. We were arguing regularly and neither of us were coping. It all reached a climax 6 months later after we had both broken down in tears on the phone. I decided to leave my job which I loved and move back up. Just as I was drafting my letter to work, my other half got a job interview. One week later he was accepted and he began to work out his notice.

We thought this would be the end of a difficult time; little did we know it was only just beginning. We moved into my in-laws house and started the process of selling our house. While the house gained a lot of interest and we had offers accepted quickly, the process soon ground to a halt when our first buyer pulled out a few weeks before completion. We were devastated, particularly as we had already found a new house to buy and it looked like we would lose it. We immediately pulled ourselves together and put the house on the marked for the second time. We again quickly found a new buyer and everything was looking up.

We were still living with family, and since I am the only coeliac, cross-contamination became a big problem. I was used to my own space and having the ability to cook my own food without becoming ill. While at my in-laws I regularly became cross-contaminated and it caused a lot of issues when they would insist on cooking me food but then use the same tongues to serve the gluten containing food as well as the gluten free food. Never before have I felt so lost with this disease. It caused such problems between myself and family. I felt stuck. If I ate the food to please them and prevent an argument, I would be ill. If I didn’t eat the food, the atmosphere in the house would only get worse. We ended up moving into my parents house, who were happy for us to cook for ourselves, just to calm the situation down.

During this time, the house we were trying to buy was put on hold (it ended up being a total of about 4 months before we received the initial start pack). Our stress levels were far too high, and it didn’t help when 2 months later, our second buyer pulled out. The estate agent we were with did nothing to ease our minds and we ended up communicating directly with the buyer to solve a non-issue; to this day, we still haven’t worked out why they got so worried.

At the beginning of September, our second buyer continued to proceed with the offer. We thought we were finally in the clear and that was when we noticed the house we were trying to buy had been put on hold. We couldn’t understand what was going on but eventually, things began to move. By the end of 2019, we were looking to complete on the sale of our house and purchase a new one. Move out of my in-laws and into our own home where we could control the food and kitchen again. During this time the level of stress had become so much for me that it triggered Asthma. Living in a large polluted town combined with the house move had exacerbated a unknown difficulty. It got even worse when the first Autumn I had asthma, I developed Bronchitis twice and a chest infection. My other half was so supportive but it really knocked me and my confidence. We started to think seriously about this move and if it was worth it, but decided as we were due to complete and move in January, we would be okay until then.

Overall, the start of 2020 was a positive one and I had every expectation to continue blogging. That was until the day we were due to complete on our house. Just as my solicitor was about to exchange documents, she received a call. Our buyers were pulling out. The feelings of despair, devastation and loss doesn’t even begin to cover the tailspin it through us into. We spent so long trying to find out why they had destroyed us this way; hours on the phone chasing solicitors and estate agents who were no longer helping us. We finally discovered the answer a week later; a mistake reading a report. That was all. It took us another week to rectify the situation, and by then it was too late. Our buyers pulled out in January and the house we loved was put back on the market.

I cant find the words to explain what February was like. We were a mess. We decided to sell our house to a 3rd party just to end the pain. In the end, we lost the house we once fell in love with. They received a higher offer and left us behind. It still hurts to write about it but by the end of the mess, I am not sure if I loved it as much. Looking at the house, I was only reminded every day of all the pain we had been through and it no longer felt like home.

Fast forward a few weeks and yet more weekends spent house hunting, we finally found our new dream home. It is closer to my work than the last place and because it doesn’t hold the painful memories of last year, it finally feels like a new start. As I am writing this, the house in Derby has now been sold to a 3rd party buying company. It wasn’t ideal and caused us much stress again both the week before we were meant to complete when they suddenly dropped the price of the offer. We negotiated to a higher number but it all felt a bit petty by the end of it. The day of completion, Friday 13th!, also started with high stress when they contacted us to say they had not received the final paperwork. Many phone calls later and the situation was finally completed. I think we just felt shock that day; too much has happened for us to have energy left to celebrate.

So, where are we now? We have officially sold our house in Derby and currently living with family until our new house completes. There is likely to be a delay to this owing to the Corona Virus, but we have hope at last. We spent last weekend in Devon relaxing and resting and recovering from this. I have learnt a lot in this process but overall, I am so grateful to my friends, family, colleagues and you guys for being so supporting and understanding during this difficult time.

Speak to you next Sunday when I am back with weekly blogs until I move into my new home. 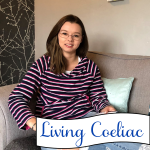 I’m Chrissi, a lover of all things food. I love re-creating and adapting recipes so they are gluten free, looking for new gluten free places to eat and more -x-

I'm Chrissi, a lover of all things food. I love re-creating and adapting recipes so they are gluten free, looking for new gluten free places to eat and more -x-

This site uses Akismet to reduce spam. Learn how your comment data is processed.

I’m Chrissi, a lover of all things food. I love re-creating and adapting recipes so they are gluten free, looking for new gluten free places to eat and more -x-